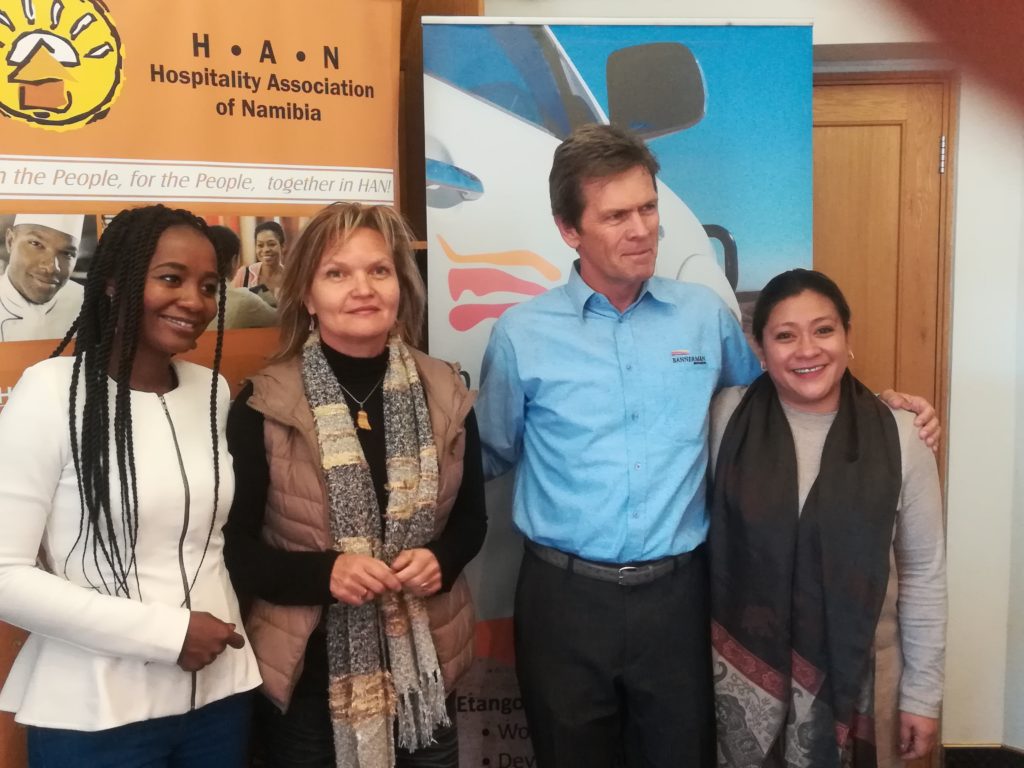 This week we were nominated as a finalist for the AAMEG (Australia-Africa Minerals & Energy Group) Africa Award for Best Workforce and Industry Development Initiative, recognising the work we have done with the Namibia Tourism Industry.

Bannerman has a structured approach to Community Development and, since 2011, has focused on four sectors to ensure impactful ESG programs in Namibia: Governance, Education, Tourism and Environment.

Since 2008 Bannerman has worked with key bodies within the Namibian Tourism industry to demonstrate that the Mining and Tourism sectors can co-exist and work together for the benefit of the Namibian nation.  Its objectives were both direct (achieving authentic support for Etango) and indirect (uplifting the Namibian nation via the Tourism sector through boosting employment, skills training, awareness and tourism sales).

Namibia has a small population, a very large, arid land area and a small, concentrated economy. Mining (predominantly uranium and diamonds) and Tourism are equally important to Namibia’s economy.

However, in 2008 the Mining and Tourism sectors were at loggerheads in the Erongo region, after years of mutual suspicion between tourism operators and uranium mining companies.

Tourism felt threatened by Mining: Namibia is branded on its international appeal as an untouched natural wonderland. Namibia boasts the best wildlife conservation record in the world, has grown several of the continent’s most successful conservation bodies and declared a National Park over its entire 1,570km coastline.

The uranium mining sector also felt threated by Tourism, with the potential for opponents to negatively influence the sophisticated, educated and German-influenced middle class in Swakopmund.  Further, there was a perceived concern that tourism operators could generate opposition to uranium mining amongst their international guests, who might collaborate with international pressure groups.

Against this hostile background, Bannerman leadership worked consistently over several years to engage with and build trust amongst both individual tourism operators and their industry representatives.

Bannerman’s initial engagement in 2008 was led by NED David Tucker as part of Bannerman’s environmental and social baseline assessment. In 2009, Brandon Munro (then GM Corporate Development) moved to Namibia to oversee the Environmental and Social Impact Assessment and to design and implement Bannerman’s Community Development Plan, under David’s guidance.

Bannerman formalised its engagement, presenting at Coastal Tourism Association of Namibia’s (CTAN) 2009 Annual General Meeting and being accepted to sponsor the Hospitality Association of Namibia (HAN) 2010 Annual Gala, with Brandon Munro providing an address calling for co-operation and de-escalation.  The substantial progress was demonstrated by glowing testimonials from the Chairs of CTAN and HAN.

In 2010, Bannerman employed Swakopmund local Werner Ewald (now Managing Director, Namibia). Werner brought to the partnership a passion for Namibia, Swakopmund and Etango – and a deep respect from the local community.  Under Werner’s leadership, Bannerman’s partnership with HAN and sponsorship of various tourism industry initiatives has continued every year from 2011-2022.

The trust and acceptance of the coastal and national tourism sector culminated in their support for the Etango Environmental and Social Management Plan. This led to Etango obtaining in 2012 an Environmental Clearance for its 6km long open pit uranium mine located within the Namib Naukluft National Park and close to one of Namibia’s best known tourist attractions.  This achievement (and the subsequent extensions of that Clearance) is the product of 14 years of sensitive and transparent community engagement.

Coastal Tourism Association of Namibia is a body that represents a range of coastal tourism operators, from single operator guides up to larger companies. A group of their members were directly affected by the Bannerman Etango project. The Etango project is situated near to the Moon Landscape tourism attraction in the Namib Naukluft National Park. Whilst the Moon Landscape is a very large area, the current tourism potential is concentrated on 5 look-out points, two of which will be impacted by the mine. Further, the road passes through the Etango pit and the necessary road closure would elongate the tours.

Bannerman is currently working with a tourism operator to ensure provision of permanent water to certain small scale mining communities.

In early 2011, Bannerman worked with HAN to host and sponsor a workshop entitled “Mining & Tourism – building synergies for sustainable development”. The objective was to break down barriers, establish direct contact at a senior level and generate go-forward engagement through future partnerships between mining and tourism.  Particular attention was paid to areas where the two industries were seen as opponents.

In preparation for the workshop “Bannerman Resources, our co-host for this conference,  has this week offered two public meetings, as per their policy of transparency and co-operation, to discuss the scope of its envisaged mining operations and the possible impact it may have on the area” (from HAN members email dated 28 February 2011).  HAN kept the Minister of Environment and Tourism closely informed in the lead up to the event, securing their support and attendance from ministry officials.

The workshop was attended by 50 delegates and brought together the six main mining companies from the region and representatives from the Namibian Uranium Association and Geological Survey of Namibia, with Brandon Munro personally ensuring that the CEOs/Directors of the various organisations were present and engaged. They were joined by key tourism operators and board members of CTAN and HAN to workshop how mining and tourism sectors could work together and flourish. Bannerman’s sponsorship included engaging a strong facilitator who had worked for both industries and had earned a reputation for strong control whilst facilitating workshops for the Uranium Rush Strategic Environmental Assessment.

The workshop had several context-building presentations and developed six projects to further develop working relationships between tourism and mining.

The outcome was excellent, with the various projects ensuring ongoing working relationships and enduring progress on the key objectives.  There was a very real transfer of knowledge and information to the tourism sector, regarding uranium mining’s importance to the nation and host community, mining initiatives to mitigate/offset environmental impacts, positive impacts on the community and opportunities for direct tourism benefit.  The mines were given tools to demonstrate their existing contributions to tourism (eg site visits, board visits, etc) and took the opportunity to expand visitors’ agendas to incorporate additional tourism activities.

In 2019 Bannerman Managing Director – Namibia, Werner Ewald received a major accolade when he was awarded HAN Tourism Personality of the Year. Werner was the first person outside of the tourism, hospitality or environment industry to ever receive the award.

For context on the remarkable degree of prestige attached to this award, previous recipients included high profile international film makers and musicians who had put Namibian tourism “on the map”. This award is a reflection of the contribution, commitment & innovation that not only Bannerman, but its staff make and continue to make to the Tourism industry in Namibia. You can read more about Werner’s recognition here.

Over the last two years, the Namibian tourism sector has suffered enormously from the pandemic. After a two year break, HAN held their 2022 Congress in February with a focus on industry recovery. The theme for the congress was ‘Unlocking New Horizons’, which was initially chosen to focus on efforts to open up tourism potential in Namibia’s youngest National Park, the Tsau/Khaeb.

The Tsau/Khaeb National Park, formally known as the ‘Sperrgebiet’ has been a ‘Prohibited Access Area’ for a century because of its diamond mining potential. The absence of human activity in this vast area has created a “time warp” protected area of global uniqueness, that holds huge potential for tourism to thrive in the area.

However, this new tourism frontier had the potential to reignite tensions between mining, who still wish to exploit the area and therefore maintain prohibited access, and tourism who want to showcase the unique flora and fauna that is on offer.

Only a few years ago, the Sperrgebiet would have become a new battleground between the seemingly mutually exclusive interests of mining and tourism.

However, with the experience and confidence gained from mining-tourism co-operation in the Erongo Region. HAN set an objective for the 2022 Congress to be the next generation of cooperation between mining and tourism.

It was a great pleasure for Bannerman’s Managing Director-Namibia, Werner Ewald to speak at the 2022 Congress as a sponsor and to bestow the legacy Bannerman created to the next generation of mining and tourism operators in a different part of the country. He shared the keys to having cooperative relationships with each other, rather than another mining tourism battleground.